Based in Cleveland, Ohio, St. Vincent Charity Medical Center is recognized for numerous centers of excellence, including its Spine and Orthopedic Institute, Center for Bariatric Surgery and Health Literacy Institute, as well as its Cardiovascular Services and Behavioral Health services.

The history of Cleveland and St. Vincent Charity Medical Center are not independent of one another. A city is people; a hospital is people—the story of the past century and a half is the story of how these people have helped each other.

Since 1865—nearly 150 years ago—a handful of pioneering Sisters of Charity of St. Augustine were brought to Cleveland at the request of Bishop Amadeus Rappe, the first bishop of Cleveland. Against the backdrop of a soul-searing Civil War and a spirit saddened by the assassination of a President, new life was teeming on the streets, avenues, shores, railways and alleys of Cleveland. However, without a hospital the city could not serve the railroad and steamboat disaster victims and returning Civil War soldiers who were requiring immediate medical attention and nursing care.

In May 1863, Bishop Rappe had proposed to City Council that Cleveland build a hospital to care for wounded soldiers, with nursing care to be provided by the Sisters. City Council appointed a committee to investigate and immediately dissension occurred. Newspaper editorials opposed a hospital under Catholic auspices since nine-tenths of the taxpayers were Protestants, and proposed instead the establishment of a nonsectarian hospital.

Familiar with failure and discouragement, Bishop Rappe made another attempt. He offered to build a hospital and provide Sisters to care for the patients if the citizens would furnish adequate financial support.

Cleveland citizens agreed and the site—at Perry Street (now East 22nd Street) between Marion and Garden Streets (now Central Avenue)—was purchased for $10,000. The initial hospital cost $72,000 of which $42,000 was raised from the primarily Protestant Cleveland community.

The Sisters of Charity of St. Augustine stated that patients would be received regardless of religious belief and that those unable to pay would have their care paid for by the city. Mother Augustine, a woman of refinement and strength of character, who possessed unusual executive ability, was the first superior of the hospital. She and seven Sisters took up their duties on October 5, 1865. Their practice of always aiding the sick and suffering regardless of creed, race or ability to pay has continued throughout the next century and a half.

Today, St. Vincent Charity Medical Center is Cleveland’s faith-based, high-quality healthcare provider. As a teaching hospital, it is home to the renowned Spine and Orthopedic Institute, the Center for Bariatric Surgery as well as complete services in cardiovascular, emergency medicine, primary care, behavioral health, occupational health and addiction medicine in a setting that is as caring and comfortable as home.

Everyone at St. Vincent Charity Medical Center is devoted to the mission to treat every patient with clinical excellence and compassionate care. 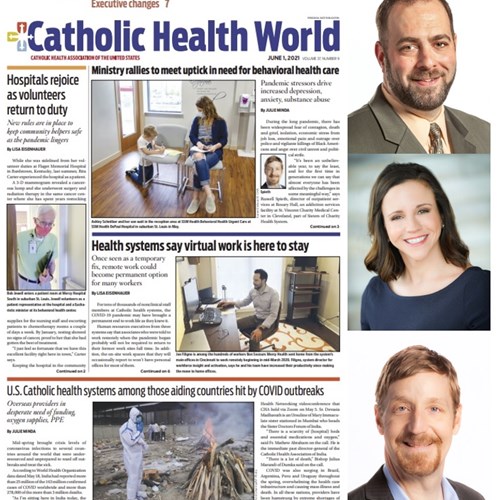 Most Americans, directly or indirectly, experience behavioral health challenges at some point in their lives. For some, it’s a life-long struggle that drains resources and fractures families. In greater Cleveland, persons with mental illness and addiction have some of the direst needs, which have been further exacerbated by Covid-19. In its June 1 issue, Catholic Health World features St. Vincent Charity Medical Center in a cover story on pandemic stressors driving increased depression, anxiety and substance abuse. Individuals struggling with mental health and addiction challenges not only face a tremendous amount stigma, but they also receive their care from a

St. Vincent Charity offers advice on when to see a spine specialist for back pain

Back pain is a leading cause of disability and one that most people try to grin and bear. Popping ibuprofen may be a short-term solution to masking pain, but it won’t fix the problem. It can be hard to tell if back pain is the result of a pulled muscle or an actual problem with the spine. On its Radiant Blog, St. Vincent Charity Medical Center offers advice about when to see a spine specialist.

Under the leadership of Dr. Bernard Stulberg, St. Vincent Charity Medical Center has launched its Robotic Joint Center as part of its Spine and Orthopedic Institute, allowing for same-day knee replacement at both the hospital’s downtown location and the Brainard Surgery Center in Lyndhurst. What started as a national trial in which Stulberg was one of only five physicians to test the THINK Surgical Inc. TSolution One Total Knee Application, St. Vincent is the first hospital in Ohio to implement this technology for total knee replacement.

“God, just keep us resilient. Let’s not get discouraged. There are so many things we can do and are doing well, and we have to keep looking for those bright spots.” Janice Murphy, president and CEO of St. Vincent Medical Charity Center, was asked by The Plain Dealer for a personal account of leading during the pandemic. The Plain Dealer and Cleveland.com are celebrating health care heroes who helped through the coronavirus pandemic and are honoring them with a collection of first- and third-person stories about their work.

Murphy is a fellow in the American College of Healthcare Executives. She holds a master’s degree in nursing and administration from the University of Akron, bachelor’s degree in nursing from Bowling Green State University, registered nursing degree from the Fairview Hospital School of Nursing, and LPN from Marymount School of Practical Nursing. Throughout her career, she has been recognized by many for excellence in leadership development, facility management, clinical quality and compassion.