Sr. Judith Ann Karam, CSA, joins other faith-based leaders in Washington, D.C., to spread the word about the importance of the 2020 Census 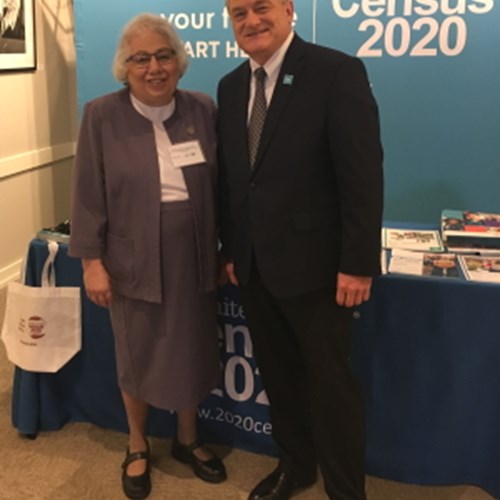 The U.S. Census Bureau convened faith-based leaders from across the country for the 2020 Census Interfaith Summit February 18 at the Washington National Cathedral in Washington, D.C., to discuss the importance of encouraging members of their communities to respond to the 2020 Census. Sister Judith Ann Karam, CSA, congregational leader for the Sisters of Charity of St. Augustine, was part of the panel discussion. Her message and those of other faith-based leaders were shared nationally on NPR.

During the panel discussion (and included on the NPR segment), Sr. Judith Ann said, “The outcome of the census is important because it signifies the dignity of the human person and resources that impact the quality of life of each individual. That is so fundamental to not only Catholic social teaching but across many other faith traditions.”

am also previously served as president and CEO of the Sisters of Charity Health System and as the board chair of the Catholic Health Association of the United States. View a recording of the entire summit here. Watch a video of faith-based leaders helping promote the 2020 Census.

In a U.S. Census Bureau article about the summit, Sr. Judith Ann said, “Our Faith calls us to understand that people are made in the image and likeness of God. So to respect the dignity of the human person, we want to ensure that all that we’re doing is in respect to that dignity. That’s what the census is all about. We need people to be counted to ensure access to federal funding for health care, education, food, and transportation, and they have an ability to be represented in congress and at the state level. It’s really about the dignity of the human person and having trust in the census process, because they themselves need to be counted. Their neighbors need to be counted. This community needs to be counted.”

Participants of the 2020 Census Interfaith Summit included leaders from the All Dulles Area Muslim Society (ADAMS) Center, the Sisters of Charity of St. Augustine and the Catholic Health Association, the African Methodist Episcopal Church, the National Latino Evangelical Coalition, and other diverse religious traditions and practices and national and regional faith-based organizations and institutions.

“We partner with faith-based institutions and communities to get the word out about the importance of the 2020 census,” said Census Bureau Director Dr. Steven Dillingham. “Faith leaders play an integral role in the community. They are the trusted voices, and in some cases in the hardest to reach communities they are the most trusted voice.”

This Faith Communities Census Weekend of Action is just before Census Day on April 1, the reference day people should use when responding to the 2020 Census. Most U.S. households will receive an invitation between March 12-20 with instructions on how to respond online, by phone or by mail. More information is available on how the 2020 Census will invite everyone to respond.

Free Event at Great Lakes Science Center in Cleveland
The U.S. Census Bureau and the Federation of Pediatric Organizations are partnering to reduce the undercount of children by hosting a free event for children at the Great Lakes Science Center in Cleveland Saturday, Feb. 22, 2020, with a news conference from 9 a.m. to 10 a.m. and family festival from 10 a.m. to 1 p.m. The news conference and event will focus on promoting the importance of counting young children during the 2020 Census.

The U.S. Constitution mandates a census of the population every 10 years. Census statistics are used to determine the number of seats each state holds in the U.S. House of Representatives and to inform how billions of dollars in federal funds will be allocated by state, local and federal lawmakers.