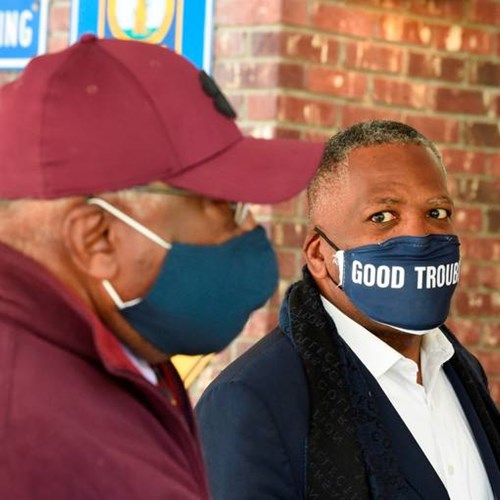 Columbia, South Carolina, Mayor Steve Benjamin is spearheading a basic income pilot program that will use funding from a social media giant to help provide 100 local fathers with hundreds of dollars each month over two years. The 100 fathers will be selected by the Midlands Fatherhood Coalition, which is a program of the South Carolina Center for Fathers and Families.

By Chris Trainor
The State

Columbia Mayor Steve Benjamin is spearheading a basic income pilot program that will use funding from a social media giant to help provide 100 local fathers with hundreds of dollars each month over two years.

Benjamin is part of an organization called Mayors for a Guaranteed Income, a group that was launched in June to advocate for the premise of a basic income in the form of recurring cash payments each month. Mayors for a Guaranteed Income announced Tuesday it was receiving a $15 million grant from Twitter founder Jack Dorsey. That followed a $3 million grant from Dorsey earlier this year.

A number of cities across the country have either launched or will be launching basic income pilot programs as part of the mayoral initiative, including, among others, Richmond, Virginia; St. Paul and Pittsburgh.

“When I heard about Mayors for a Guaranteed Income, we really wanted to be one of the first Southern cities ... to test the concept,” Benjamin said.

Benjamin said Columbia’s funds for the program will be managed through the nonprofit Central Carolina Community Foundation. In the Columbia pilot, 100 fathers — selected through the Midlands Fatherhood Coalition — would receive $500 a month for a period of two years.

The Midlands Fatherhood Coalition is part of the S.C. Center for Fathers and Families, and offers a number of community-based programs and support services for fathers.

Funds for the CLIMB initiative, which will likely launch in 2021, will be raised privately, Benjamin told The State. About $1.4 million will be raised. Dorsey has already contributed $600,000 toward Columbia’s cause. The mayor said philanthropic donations will be courted for the remainder of the funding, with fundraising efforts set to ramp up early next year.

“We want to really measure the impact of this program on the men who will be receiving the guaranteed income, and the impact we know they can have and will have on the surrounding communities,” Benjamin said on Tuesday’s conference call.

The mayor said participants will likely receive a debit card that would be loaded each month, allowing the CLIMB program to collect data on how the funds are used. Benjamin said officials will protect the anonymity of those who are selected for the program.

“This will allow us, we believe, to strengthen the narrative that folks need these funds to participate in the things that we all take advantage of every single month,” Benjamin said.

The idea of a universal basic income gained attention in 2019 and earlier this year through the presidential campaign of Democrat Andrew Yang, who proposed giving all Americans a “freedom dividend” of $1,000 each month.

Yang’s presidential hopes ultimately fizzled, but the concept lived on. In May, he announced that his non-profit Humanity Forward would be selecting two residents in Richland and Kershaw counties to receive $1,000 a month as part of a “universal basic income demonstration.”

The premise of the basic income movement is the establishment of an “income floor” through monthly payments. On a city level, Stockton, California and its mayor, Michael Tubbs, launched a basic income pilot program in 2019, in an effort to see whether monthly cash payments could bolster health equity and address income inequality, among other factors.

Benjamin told The State he was initially “a skeptic” on the topic of universal basic income. However, he noted the effects of COVID-19 have spurred him to at least explore the possible benefits of the concept.

“With the onset of the pandemic and seeing the way that families were using the $1,200 check from the federal government to meet their very basic needs, I really found it illuminating, and committed myself to exploring new ways to look at the incredibly challenging issue of poverty in America,” Benjamin said.

“I agreed when I accepted Mayor Tubbs’ invitation to join Mayors for a Guaranteed Income, that we would shape a pilot program here that would go to the heart of some of our major challenges.”