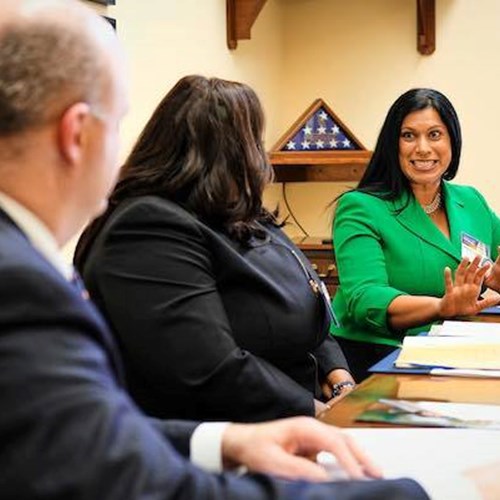 Sisters of Charity Foundation of South Carolina Vice President of Initiatives and Public Policy Stephanie Kripa Cooper-Lewter was recently in Washington, D.C., meeting with lawmakers to educate them about the foundation’s work and about philanthropy in general as part of the 2017 Foundations on the Hill event. Foundations on the Hill is an annual two-day event that brings together foundation leaders from across the country for meetings with Congress about key issues of importance to foundations and philanthropy.

Foundations on the Hill is presented by the Forum of Regional Associations of Grantmakers, in partnership with the Alliance for Charitable Reform and Council on Foundations. Foundation trustees and staff work with their regional association to schedule meetings on Capitol Hill to personally discuss their work with members of Congress.

The purpose is to:

Pictured is Vice President of Initiatives and Public Policy Stephanie Kripa Cooper-Lewter from the Sisters of Charity Foundation of South Carolina as she meets with lawmakers and Southeastern Council of Foundations President Janine Lee.