Sisters of Charity Foundation of Cleveland honored for 20th anniversary 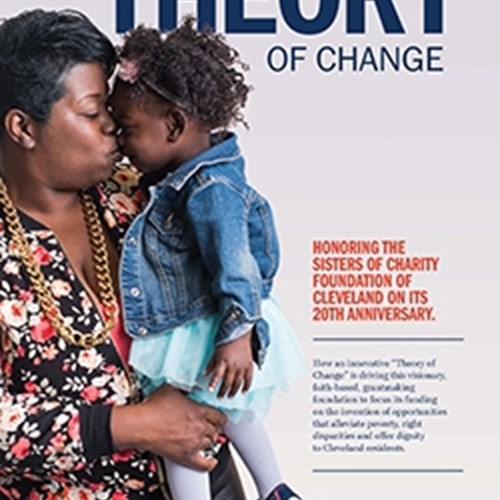 The June 18 issue of Crain’s Cleveland Business featured the Sisters of Charity Foundation of Cleveland's 20th anniversary, and “how an innovative Theory of Change is driving this visionary, faith-based, grantmaking foundation to focus its funding on the invention of opportunities that alleviate poverty, right disparities and offer dignity to Cleveland residents.”

Coverage of the foundation and its impact included the following stories:

A message from Susanna H. Krey, president, Sisters of Charity Foundation of Cleveland

For more than two decades, the Sisters of Charity Foundation of Cleveland has partnered with residents, nonprofits and community leaders to break the cycle of poverty in Cuyahoga County. We are a grantmaker, convener and collaborator to many vital efforts.

"We believe in the value of all people. We live this value by listening -- hearing the voices of those who are economically poor, connecting and empowering them. ..."

Sisters of Charity Foundation: 20 years of work to break the cycle of poverty

Over the last two decades, the work of SOCF has centered on a simple vision: a community in which opportunities for growth and quality of life are shared by all. But what makes the foundation's work unique is its laser focus around one mission: breaking the cycle of poverty right here at home.

Voices of Leadership: A conversation with Felton Thomas Jr. and Tari Rivera

The legacy and important work of the Sisters of Charity Foundation of Cleveland are what drew both Felton Thomas Jr. and Tari Rivera to get involved in its mission. As they transitioned between eras of leadership, Rivera and Thomas reflected on the accomplishments of SOCF's last 20 years and the opportunities that lie ahead.

For the Sisters of Charity Foundation, ending homelessness in Cuyahoga County is a team effort. SOCF and its partners take a multi-pronged approach that works to benefit three groups of people experiencing homelessness: individuals with a disability and long periods of housing instability; youth and young adults ages 15 to 24 with no parent or legal guardian; and families.

There are plenty of challenges facing those who experience chronic homelessness, but the Housing First initiative, led by Enterprise Community Partners, believes in making stable housing the first priority when serving the homeless.

IMPACT IN ACTION: A Place 4 Me

Launched in 2014, A Place 4 Me focuses on preventing and ending homelessness among one of the most vulnerable populations — youth and young adults ages 15 to 24 who don't have the same familial safety net possessed by other people their age.

Reflecting a belief that doctors' visits should be educational, not perplexing, for Clevelanders, SOCF teamed up with Project Learn in 2007 to help health professionals better communicate with patients at St. Vincent Charity Medical Center.

Promise Neighborhoods are inspired by the Harlem Children's Zone, an innovative New York City program that links educational systems, social services and community initiatives to help break the cycle of poverty. The Obama administration started the Promise Neighborhood effort to replicate this model across the country seven years ago.

Growing up in Central, Jerome Baker knew how integral male role models had been in his own life. 'They told me to pursue my education,' recalls Baker. 'They praised me for my basketball skills, but also for subtler things, like the way I carried myself.' As an adult, Baker wanted to pay it forward and started a group mentoring program called the Men of Central. 'But I didn't really understand how to organize or build up relationships,' he says.

A few years ago, Quiana Singleton was “kind of falling apart,” as she recalls it. The proud mother of three kids, Singleton's 4-year-old son Qe-yon was born with severe special needs. Singleton knew Qe-yon needed early therapy and support to thrive later in life, but she had no idea how to find a daycare center that provided it. 'When you can't help your kid, you feel like you're failing as a parent,' she says.

Catholic sisters face critical questions about the future of their ministries: How can we continue our good work together? What greater impact might result from uniting individual congregations' efforts? How can we be sure the legacy and service of women religious continues as we recognize our community's dire needs?

Human trafficking was not an area of ministry for Sister Anne Victory HM and her fellow Catholic sisters until they attended a conference on the subject about 10 years ago.

The enduring legacy of the Sisters of Charity of St. Augustine

There was an urgent need for health care for the poor when four women from France heeded a call by the bishop of Cleveland to come to the city's aid. The year was 1851, disease was spreading through poor communities, and the number of children being orphaned was on the rise.

Sisters of Charity Foundation board of directors

A full listing of the Sisters of Charity Foundation board officers and members.