The Sisters of Charity Foundation of Cleveland, CHN Housing Partners and other partners broke ground August 25 on a 50-unit supportive housing development in Cleveland to provide residents for young adults between the ages of 18 and 24 (transition-aged youth or TAY) who are experiencing homelessness and housing insecurity.

The new development, Cuyahoga TAY, will offer housing, followed by support services, giving individuals space for recovery from the trauma of homelessness and the events that may have led to it, along with young adult-identified support services.

Below is the text of an article that appeared on the News 5 Cleveland website, which is also available here.

Other media outlets covering the groundbreaking include 19 News, ideastream and Crain's Cleveland Business.

When Hannah Gates entered her adult years, she had already spent half her life living without a consistent home of her own. But she found the expectations of adulthood compounded her challenges.

“Just like as a child, I didn’t have time to be a child. As a young adult, I didn’t know what that looked like either,” she said. “At 18, my parents got divorced. My dad moved out of the country and my mom, she had a moment where she didn’t think she was capable of being responsible for me anymore. So I had to be responsible for myself.” 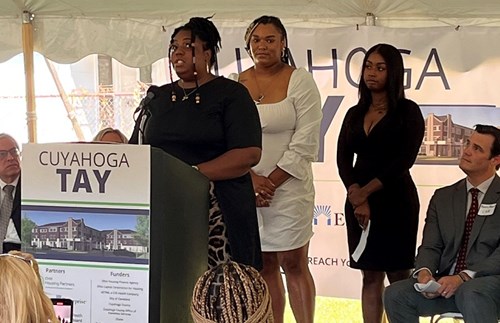 She dropped out of high school and found herself crashing on friends’ couches, at family members’ houses and staying in temporary shelter. When she didn’t pass the GED exam after several attempts, she considered giving up on dreams of attending college.

“It wasn’t until I went to stay in a homeless shelter for the first time and picked up roaches out of the mattress that I slept on, that I decided I was going to pursue my degree,” she said. “I went back to high school online, got straight A's while staying in a shelter with a hot spot and continued to do that into transitional youth housing.”

Hannah spent one year at a Missouri University on a volleyball scholarship before transferring to Cleveland State University. The transition back to Northeast Ohio presented its own challenges.

“When I came back home, I didn’t have a home to come back to,” she said. “I stayed in my car, I stayed on friends’ couches. I also got a roommate for a couple of months but that didn’t end up working out. [There were] a lot of different housing solutions that weren’t permanent.”

The 50-unit apartment building in Cleveland’s St. Clair - Superior neighborhood is designed for transition age youth (TAY) between 18-24, who have been experiencing homelessness.

Cuyahoga TAY will be located on several plots of land between East 45th and East 47th streets. It will offer housing, amenities like a fitness center and computer room, as well as supportive services like mental and behavioral health, financial literacy and life skills training.

“Our hope is that the young adults here — this will be a starting point for them and they’ll eventually move onto more independent housing,” said Elaine Gimmel, the dxecutive director of EDEN.

The housing nonprofit will serve as the building’s property manager and is a co-owner and co-developer, along with CHN Housing Partners. The project was created with insight from young adults experiencing homelessness, like Hannah, through A Place 4 Me and REACH Youth Action Board.

“People assume the reason why young adults are homeless is because they don’t want to be successful, or they gave up on themselves or they chose to go a negative route,” Hannah said. “We all have things that we go through and we all have adversity.”

Gimmel explained roughly 500 young people experience homelessness each year in Cuyahoga County, with people of color living with housing insecurity at a rate three times more than their peers.

“We all have somewhere to lay our heads at night, we all have that place to go home to. These young adults don’t. So for them to even think about what’s next, or the future, without a permanent, affordable housing option, it’s kind of next to impossible, I think,” she said.

The Cuyahoga TAY has been a collaborative effort between EDEN, CHN Housing Partners, Cuyahoga County, the City of Cleveland and others. The roughly $16 million project is funded by a Low Income Housing Tax Credit award, along with private and public money.

“I’m a political science and economics double major. And I want to go into maybe policies, but the end goal is maybe a senator and then possibly a president,” she said.

Construction on Cuyahoga TAY is expected to finish in the fall of 2023. Residents will be identified for housing through Cuyahoga County Coordinated Intake and prioritized based on length of time experiencing homelessness, disability status and other challenges.