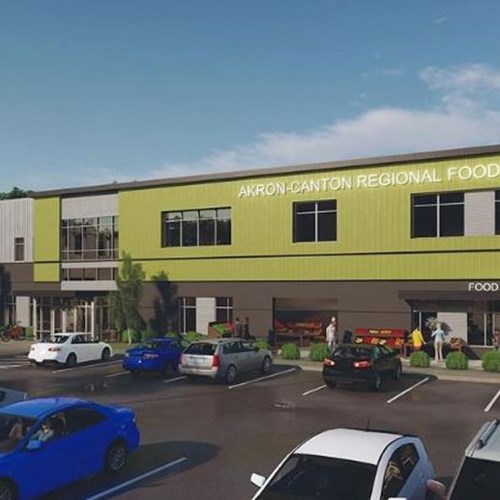 The Akron-Canton Regional Foodbank has raised $8.5 million of the $11.5 million needed to build in Canton and expand in Akron, with help from the Sisters of Charity Foundation of Canton and seven other “Leadership Investors” that gave at least $500,000 each. The total expansion will triple cooler space, lessen the travel distance for partners in the greater Canton area and engage up to 300 more pantries, shelters and other agencies.

The Repository Editorial: Step closer to last bite from hunger

Delivering remarks Thursday at a special announcement in the effort to end hunger in our region, William Shivers summed up one of the many things that makes our community special.

“When we have a common cause and get behind it, we can do anything,” said Shivers, the president of Huntington National Bank’s Canton and Mahoning Valley regions and board chair of the Akron-Canton Regional Foodbank.

The “anything” we celebrate today: the fact more than $8.5 million of an $11.5 million capital campaign to build a new food warehouse in northeast Canton already has been secured through business, foundation and personal contributions.

“I told Dan early on, ‘Canton will be committed,’” Shivers said, referring to Dan Flowers, president and CEO of our region’s foodbank.

With the $11.5 million, Akron-Canton Regional Foodbank will build a food warehouse on the site of the former Fishers Foods store on Cherry Avenue NE. The space, roughly 40,000 square feet, dramatically will increase foodbank storage capacity, allowing it to “reach further and feed more.”

The foodbank’s facility in Akron also will be expanded. Current space is maxed out, which has hindered the agency’s ability to continue to cut into food shortages in our area, where roughly 1 in 7 residents face “food insecurity” — not knowing where their next meal will come from.

“There is a long runway of available food, but we need the space to (process) it,” said Flowers, who called the partnership in Canton a “transformational project” being announced at an “historic occasion” on a “monumental day.”

Those big words reflect the level of cooperation and collaboration shown by the numerous parties involved in seeing the Growing for Good plan reach this point.

“To see the entire community rally around this idea, it’s a great thing,” said grocer Jeff Fisher, whose family first opened the Cherry Avenue store in 1954.

We join Fisher in being thankful the site will become “a strong community asset” and “not an old store sitting empty.”

Flowers said a Canton warehouse will save fuel and time for local pantries and other foodbank partners that travel to Akron for perishable and nonperishable goods. An additional “200 to 300 more hunger relief partners” could be helped because of the added infrastructure.

While we join Flowers in celebrating the partnerships, the fundraising tally and the greater potential for eradicating hunger, the finish line remains in the distance.

“We have a lot of momentum, but we’re not done yet,” Flowers said. “We hope the community will stand with us, lock arms and turn this dream into a reality.”

In a nation as wealthy as ours, where food is available in abundance, no person in Northeast Ohio — or anywhere — should experience hunger. We’ve shown if we get behind the effort, we can do anything.