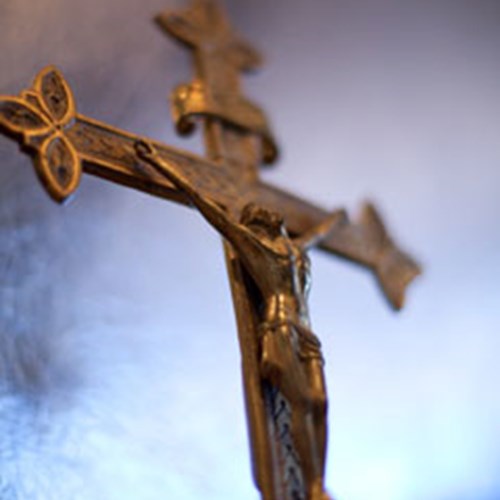 On behalf of the Catholic Health Association, we are pleased to share the following reflection for Christmas:

In those days, Caesar Augustus published a decree ordering
a census of the whole world.
LUKE 2:1

When our son was growing up, every year during the Christmas season, we would set up a simple creche with Mary and Joseph and Jesus and all the usual Christmas characters. I’d allow him to move the figures as I read the story of Jesus’ birth from the Bible. One day, when he was around four, he came to ask me to read the story to him again. I was in the middle of something, so I told him to go set up the creche and I would be over. When I arrived a few minutes later, I found he had set up all the figures, but that our globe was sitting right in the middle of the scene. Thinking he was being silly, I told him the globe needed to go before I could read. Looking disappointed, he returned it to the shelf, and I began to read, “In those days, Caesar Augustus published a decree ordering a census of the whole world.” He tugged at my sleeve and asked, “Now can I get the globe?”

Already at the age of four, he had intuited a central theme of the Christian gospel: the coming of Jesus is an event of global ignificance. Jesus arrived in history at a time when everyone was on the move. He was born in a particular place at a particular time, but the Kingdom of God that he came to announce was not just for his own town or even for those who shared his language or faith tradition. What he had to say and what he was to do had implications for the whole world.

We get clues of this in the story of his birth when we hear of “magi from the East” coming to see him. In his adult life, we hear stories of Roman soldiers seeking him out and a Syrophoenician woman asking him to heal her daughter. In the decades immediately following his death and resurrection, we know that news of Jesus uickly spread all around the Mediterranean Sea, into Ethiopia, perhaps even as far as India. Those who had no idea where the tiny dot of Nazareth was on the map, nor any idea about the long hope of Jesus’ people for a coming Kingdom of God, suddenly found themselves wrapped up in dreaming with God about what earth could look like:

People far and wide began to see themselves as part of God’s greater plan and find ways that they could contribute to its coming about.

Our Catholic hospitals, clinics, nursing homes and community partnerships continue to witness today Jesus’ global impact. The diversity of our associates and patients and residents is a sign that the Kingdom of God that Jesus inaugurated is still powerfully alive. We’ve each been wrapped in a vision of a just and “whole” world that crisscrosses nations and languages and even religious practice, but makes a daily difference in millions of lives.

So today, let us light the candles, sing our favorite songs and feast with gratitude. The Jesus born in Bethlehem 2,000 years ago is still being born this day in our hearts—giving us energy and imagination, courage and hope to keep working for the Kingdom of God in our own time.

Watch a video of this Advent reflection here.