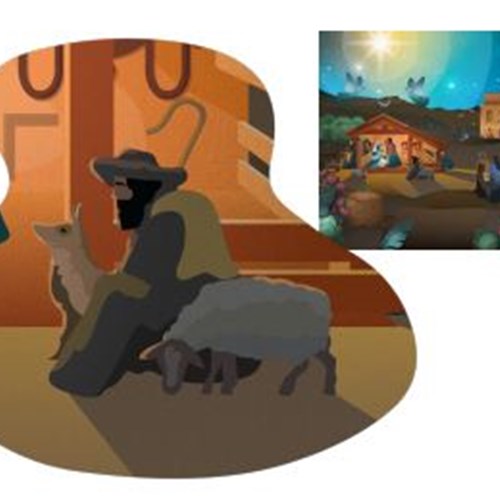 On behalf of the Catholic Health Association (CHA), we are pleased to share the following reflection for the second week of Advent:

DO YOU SEE THE SHEPHERD?

Many of us are familiar with the legend and symbolism of why the candy cane was created: the ‘J’ shape stands for Jesus, while also reminding of his role as a shepherd; the colors of red and white symbolize the purity of baptism and the blood shed by Jesus in death. While the treat’s symbolism can certainly be fun and useful to us today — especially when trying to keep little ones entertained — the function of the shepherd’s hooked staff holds symbolism for an adult audience as well.

Today’s readings reinforce the image of God as a great comforter and shepherd, calling the flock and caring for them with tenderness and compassion. For the early Christians, this image, and the image of the hook the shepherd uses to gather his sheep in close to him, would have been representative of a shift in understanding from one that was purely legalistic to a more mystical, ‘felt sense’ of God’s work in the world. Quite literally, the hook is used to gather the sheep in to be comforted by the shepherd, as opposed to using harsher methods of containment.

John the Baptist, featured prominently in today’s gospel, is a prime example of this shift who, in his camel’s hair and leather outfit, would have stood out as different even in his time. As John proclaims the coming of Jesus, the one who will baptize with the Holy Spirit, can you imagine how the message might have been received? Whereas early Christians would have been accustomed to religious leaders who were rigid in their understanding of faith, John speaks of the Spirit, an entity not easily mapped out

For those of us who might have a difficult time ourselves with the mystical elements of discipleship, the hooked staff can serve as a similar reminder of the ways in which we are called not only to the ‘law’ itself, but to the Spirit of it. Perhaps we have come to understand the role of the Spirit more intimately in this year when many of us have been unable to participate in formal worship to which we are accustomed. Though certainly worship in community is vital, many found more personal connections with the divine in the form of solitary prayer and worship when community gatherings proved unsafe. Have you continued to live in that Spirit? How have you allowed yourself to be ‘gathered in’ by God the shepherd in this time?

Watch a video of this Advent reflection here.