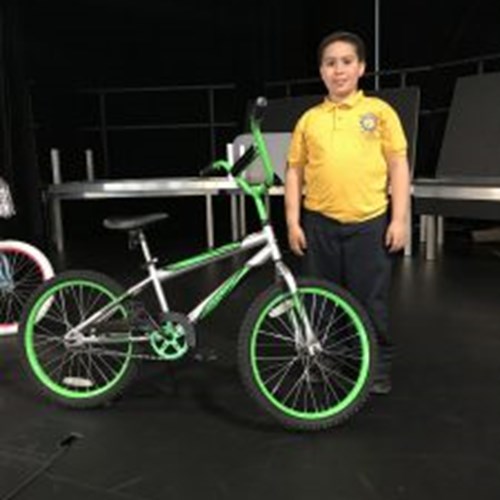 ion-Sterling. Open to first and second graders, the reading program aims to encourage young readers to increase their reading by awarding a bicycle to students who read books during the school year. Students received one raffle ticket for every book read and then two names per classroom were drawn at the end of the year with winners receiving a new bicycle.

This year’s program set a record for most books read and most scholars participating since 2014 when Read and Ride began in the Central neighborhood. A total of 240 Cleveland Metropolitan School District scholars participated this year with an astounding 1,260 books read, with a dozen bicycles being awarded. In 2016, 612 books were read as part of the program and 165 first and second graders participated.

“This is my first bike without training wheels,” said Miguel Nieves, second grade student at George Washington Carver Elementary and winner of a Read and Ride bicycle. “I read 10 books. My favorite book is Snails and Slugs.”

Read and Ride focuses on first and second grade students because reading ability and comprehension is a necessity when a student enters third grade. Reading at grade level is meaningful at any age, but third grade is the year when students make the leap from learning to read to reading to learn. It’s an academic hurdle that, if missed, can leave kids lagging behind for the rest of their academic career. Research shows that once this type of learning lag exists, it’s difficult for kids to catch up. On a national scale, according to the Annie E. Casey Foundation’s analysis of 2009 NAEP data 83 percent of low-income students test below proficient in reading at the start of fourth grade, as do 55 percent of moderate- and high-income students, leaving the U.S. with a grim overall gap of two-thirds of children testing below proficient in reading.

“The bike raffle really motivates the students to read because it offers them a chance to win something that many of them wouldn’t normally get to have on their own,” said Ms. Robinson, second grade teacher, George Washington Carver Elementary.

The Ohio Department of Education Third Grade Reading Guarantee is a program to identify students from kindergarten through grade 3 that are behind in reading. Schools will provide help and support to make sure students are on track for reading success by the end of third grade. Therefore, one of the goals of Cleveland Central Promise Neighborhood is that every third grade student in Central reads at third grade level. Promise Neighborhood works closely with community partners such as the Knights of Pythias and Cleveland Metropolitan School District to create educational support systems outside of the school day.

“I love working with the schools on Read and Ride every year. I was an avid reader during elementary school and rode a purple and white bicycle similar to the bikes we give to participants. It brings me joy to see the long list of book titles turned in by the students and the smile on their faces when we conduct the awards ceremony,” said Dawn Glasco, engagement coordinator, Cleveland Central Promise Neighborhood. “Last year, a parent said that her first grader had begun to read at a third-grade level.  That’s what Read and Ride is all about—progress. I’m thankful to be a part of such an exciting and rewarding experience.”

The Read and Ride program started in Longview, Texas, in 2008 by Pythian Lodge #28. Over the years, the program has expanded to several other Pythian Domains, including Ohio. In 2014, Supreme Chancellor Keith Stookberry expanded the program and made it nationwide. The Knights of Pythias has a long history of working in the community, both locally and nationally.

“What I enjoy most about the program is the enthusiasm of the children despite all the disadvantages they endure. My heart goes out to them. I see myself in them. I admire them,” said Stan Wolski, chancellor commander of Owatonna Lodge #62, domain of Ohio, Knights of Pythias.

All bicycles for the elementary Read and Ride program are provided by the Knights of Pythias.