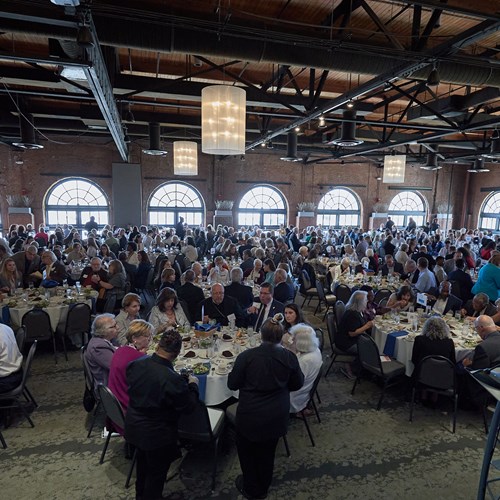 More than 400 people attended the Joseph & Mary's Home Perseverance in Hope 2022 Benefit Luncheon in Cleveland on September 13, helping raise $95,000 to support the ministry's mission of providing healing and assistance with permanent housing.

The new name of the ministry—Joseph & Mary’s Home—was also unveiled at the luncheon. The name reflects the addition of Mary’s Home to now serve both men and women.

Bishop Edward C. Malesic of the Catholic Diocese of Cleveland served as the keynote speaker. The diocese published an article about the event. The full text of the article is below or available here.

Joseph & Mary’s Home is a ministry of the Sisters of Charity Health System.

News of the Diocese

More than 400 people gathered in person for the first time since 2019 for the annual Perseverance in Hope luncheon in support of Joseph & Mary’s Home, the only homeless service provider in Northeast Ohio focused exclusively on medical respite care. The ministry was established 22 years ago as Joseph’s Home by the Sisters of Charity of St. Augustine. Previously, it focused on offering services to men. However, it became evident women were in need of the same assistance, so Mary’s Home opened early in March.

Attendees at the Sept. 13 event heard Bishop Edward Malesic deliver the keynote address in which he shared his thoughts about the innovative nonprofit facility. Dan Moulthrop, CEO, the City Club of Cleveland, returned for the 10th time as master of ceremonies.

Lorraine Dodero, a well-known local philanthropist, received the David Henderson Memorial Award in honor of the major role she played in the successful opening of Mary’s Home earlier this year. The award is named after Henderson, a Joseph’s Home alumnus and board member who passionately supported the ministry’s mission. Henderson died in 2017 and the award was created to keep his spirit of advocacy alive. It was presented by Jeanne Colleran Weaver, last year’s recipient.

“There is no way I couldn’t not get involved,” Dodero said, after learning about the ministry’s mission. “We had a lean, mean team and I’m so grateful we got this done so quickly,” she said of the efforts to open Mary’s Home. “I am blessed to have been able to help. I did it with love,” she added.

The Dream Team Partnership in Service Award, which recognizes ministry partners who have made a deep and meaningful contribution to the home’s mission, was presented to the Community West Foundation in honor of its 15-year partnership and commitment to Joseph & Mary’s Home. Marty Uhle, Community West Foundation president and CEO, accepted the award, which is named after the eight Sisters of Charity of St. Augustine who helped develop numerous projects responding to evolving community needs, including Joseph & Mary’s Home.

Uhle noted that the Community West Foundation distributed $6.7 million in grants last year. The foundation has awarded $500,000 to Joseph & Mary’s Home over the past several years. Although the foundation’s mission is based on Mathew 25:35-40, “For when I was hungry you gave me something to eat, I was thirsty and you gave me to drink … Truly, I tell you, whatever you did for the last of these brothers and sisters of mine, you did for me,” Uhle said it is not affiliated with any particular religion. Grantees, friends and donors come from diverse faiths and practices.

Searcy set the tone for the event noting, “Today we celebrate the healing and life transformation experienced by hundreds of medically fragile adults experiencing homelessness who have been served at Joseph’s Home and now Mary’s Home.” He said during the past year, the facility has accomplished goals of providing dignity and independence to residents, thanks to the efforts of donors, volunteers and staff. Searcy also praised the eight CSA sisters who first recognized the needs of adults experiencing homelessness who had been discharged from the hospital and had nowhere to stay while recovering.

“It is also a culmination of the generosity of our community in coming together during a pandemic to make this lifesaving service a reality for women,” he added.

Beth Graham, Joseph & Mary’s Home executive director, said the facility allows those experiencing homelessness to “rest and reset, to stabilize their immediate medical issues and to find a permanent home.” Graham told the group prior to last year, she was working elsewhere but was led to this ministry, which she embraced and loves.

Sister Judith Ann Karam, CSA congregational leader, introduced Bishop Malesic and offered a brief glimpse of his background prior to his appointment as bishop of Cleveland two years ago.

“He’s a kind, caring, genuine person,” she said, adding, “I did my research.” Sister Karam quipped that she has a friend in Greensburg, Pennsylvania, the diocese the bishop previously led, and he had many good things to say about Cleveland’s new bishop. “He told me to take care of him,” she said. “You are a gift to our diocese,” she told the bishop.

Although he was familiar with respite homes, Bishop Malesic said he did not have a chance to tour Joseph & Mary’s Home until this summer. He had praise for the ministry, noting it aligns with the challenge given to us by Pope Francis, whom he said “has urged us to be a Church that reaches out to the margins, where people sometimes get lost and hurt He has asked us to act as a sort of field hospital, taking our care to the people most in need of it, and doing what we do best: offering help and hope. Joseph’s Home is the Church in action, I believe: a field hospital to the homeless who are on the fringes of society.”

The bishop echoed earlier statements about the importance of the ministry, reminding attendees it is the only homeless service provider that is focused on medical respite and the possibility of long-term housing for the homeless after they regain their strength.

“I know firsthand that Joseph’s & Mary’s Home treat people with dignity, no matter their circumstances. All of this good work flows from our consistent and persistent respect of life, since all life is a gift to us from God that must be nurtured, supported and defended.”

During his August visit to the home, the bishop said he was “totally amazed and blown away by the range of services and the dedication of the people who work and volunteer there.” He had an opportunity to meet clients and residents who he said “are loved back into health with their spirits renewed by a caring environment and a loving place. One person told me, ‘This place saved me. I love it here. People are so good to me.’ How awesome is that?” he asked.

“One person even shook my hand and said, ‘I never met a bishop before.’ I told him it was an honor to meet him and that bishops aren’t all that impressive, but he was,” the bishop said.

He told luncheon attendees that we proclaim the Gospel by how we live it, crediting the CSA sisters for their long commitment to their ministries. The sisters arrived in Cleveland in 1851 from France and served as the city’s first public health nurses. Their work expanded to include serving the health, human service and educational needs of Cleveland’s most impoverished residents. “Don’t ever doubt the power of a good woman to make a difference. Certainly these religious women have,” he said.

Since arriving in Cleveland in September 2020, the bishop said he has made it a point to build awareness of the good works taking place daily throughout the diocese by telling the inspiring stories of the clergy, religious and faithful on diocesan platforms including the website, weekly e-newsletter, Northeast Ohio Catholic magazine, social media and through videos. One video produced by the diocesan Communications Department and featuring a resident of Mary’s Home, was shown at the luncheon.

The bishop commended the CSA sisters, the Sisters of Charity Health System and the Joseph & Mary’s Home leadership, as well as Dodero and the Community West Foundation, for their dedication to the faith, generosity and deeply caring spirit.

“If you want to see the Church at its best, go to Joseph & Mary’s Home and see the smiles and reward of your generosity,” he added.

Moulthrop said more than $15,000 was raised by those who donated by using QR codes on each table at the luncheon.