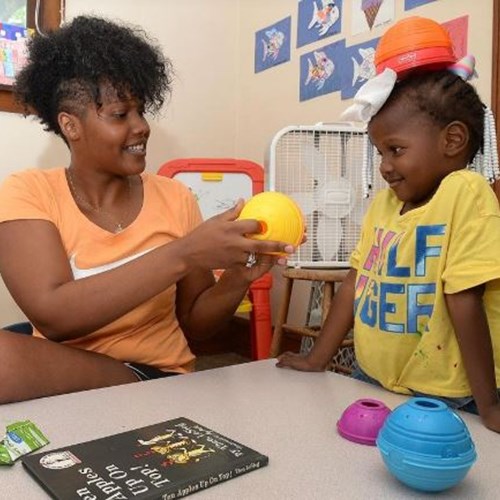 The city of Canton is trying to increase in-home child care centers and awarded the Early Childhood Resource Center a grant last year to fund training and licensing for in-home providers. The initiative helps people become employed with a business of their own while also helping families in their immediate area that need child care options.

The Canton Repository recently wrote about the initiative. The full text of the article is below or available here.

Ky’Nesia Campbell’s southwest home has a playroom with a basket of stuffed animals, book shelves and a kid-sized table.

It also has a designated napping area, covered electrical outlets and a daily schedule posted with other notices on kitchen cabinets. Most are state requirements for Imagination Station, the in-home child care service Campbell is opening with help from the Early Childhood Resource Center (ECRC).

“It helps people become employed with a business of their own that they can make a livable income, and it also helps family in their immediate area that were looking for childcare options,” she said.

The new in-home facilities are expected to serve about 200 children in Canton. Turner said the ECRC offers services to area child care providers, such as professional development, and saw this as a community need.

“In the city of Canton, we just really felt like there needed to be more options for people, and there’s a lot of people that want their children to be in-home and be cared for, and so this is giving them more options,” she said.

From the city’s perspective, it’s a great workforce development program.

“It empowered women to have their own businesses, at the same time, educating our babies and early toddlers to be high achievers,” said Rollin Seward, director of the city’s Department of Development.

The department distributes federal CDBG grants each year in amounts of roughly $15,000 to $500,000. The city accepts and selects applications. Seward said it’s the first time, at least in recent years, that the Early Childhood Resource Center received CDBG funds.

The program caught the attention of the Ohio Conference of Community Development, which is comprised of more than 175 community and economic development organizations. The statewide association will bestow the President’s Award for Innovative Practices to the Early Childhood Resource Center on Wednesday at an annual luncheon.

Campbell said she expects to open Imagination Station, which will serve up to six infant to school-aged children, in about two weeks. Her 1-year-old daughter will be counted in the total.

The home just has to pass a final state inspection. Campbell said she failed the first one, in part, because her refrigerator was three degrees warmer than required and she needed smoke/carbon monoxide detectors.

“They make sure you have everything done,” she said.

After becoming licensed, Campbell said she intends to finish her CDA courses and test. Moving from her parents’ house to her new rental home, preparing it for child care service and working on the credential and state license all together was too overwhelming.

ECRC administrators said they learned it was best to seek state licensing first because the CDA credential requires work observation and program participants were new to child care operation.

Campbell said she previously worked the midnight shift as a home health aide. With three girls of her own, becoming a child care provider is a way for her to spend more time at home while following her passion.

“I just love kids,” Campbell said. “I love to see how their minds work.”

The CDA credential is for people who don’t have a college degree in early childhood education and is separate from state licensing needed to operate a child care center. Ohio Department of Job & Family Services licenses child care programs and operates a Publicly Funded Child Care program for parents who are in school or working.

Turner said the center offers CDA classes in Stark, Summit and Mahoning counties. It helps with the state’s five-star Step Up to Quality rating, which the state requires or encourages for publicly funded programs.

“For you to get a star that is a three, four or five, you have to either have people on your staff that are degreed, with a college degree, or they need to have one of these CDA credentials,” Turner said.

The greater the rating, the greater the state reimbursement rate for publicly funded children, said Jennifer Scott, early childhood specialist at the ECRC. The CDA credential involves 120 hours of class time and 480 hours of in-person training.

“It’s a national credential, so it’s something, if they left the area, they could take with them,” Scott said.

The city’s CDBG fund also supplied in-home providers with some toys and safety or basic supplies. Scott said eight people began the grant-funded program and five have made it to initial licensing visits. Two already are open.

The Early Childhood Resource Center is a ministry of the Sisters of Charity Health System.