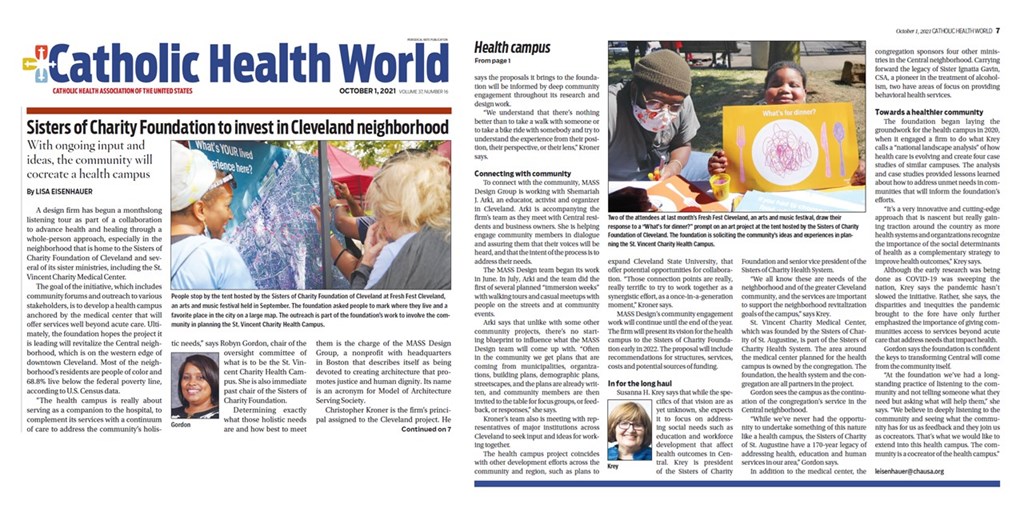 In its October 1 issue, Catholic Health World features a cover story about the foundation's work in partnership with MASS Design Group to conduct research and dialogue with residents and institutions of Central and greater Cleveland to understand directly from the community what social and economic needs should be addressed by the Health Campus, such as poverty, structural racism, and mental health and addiction services, which would build on the Sisters’ legacy of behavioral health services.

Sisters of Charity Foundation to invest in Cleveland neighborhood

With ongoing input and ideas, the community will co-create a health campus

A design firm has begun a monthslong listening tour as part of a collaboration to advance health and healing through a whole-person approach, especially in the neighborhood that is home to the Sisters of Charity Foundation of Cleveland and several of its sister ministries, including the St. Vincent Charity Medical Center.

The goal of the initiative, which includes community forums and outreach to various stakeholders, is to develop a health campus anchored by the medical center that will offer services well beyond acute care. Ultimately, the foundation hopes the project it is leading will revitalize the Central neighborhood, which is on the western edge of downtown Cleveland. Most of the neighborhood's residents are people of color and 68.8% live below the federal poverty line, according to U.S. Census data.

"The health campus is really about serving as a companion to the hospital, to complement its services with a continuum of care to address the community's holistic needs," says Robyn Gordon, chair of the oversight committee of what is to be the St. Vincent Charity Health Campus. She is also immediate past chair of the Sisters of Charity Foundation.

Determining exactly what those holistic needs are and how best to meet them is the charge of the MASS Design Group, a nonprofit with headquarters in Boston that describes itself as being devoted to creating architecture that promotes justice and human dignity. Its name is an acronym for Model of Architecture Serving Society.

Christopher Kroner is the firm's principal assigned to the Cleveland project. He says the proposals it brings to the foundation will be informed by deep community engagement throughout its research and design work.

"We understand that there's nothing better than to take a walk with someone or to take a bike ride with somebody and try to understand the experience from their position, their perspective, or their lens," Kroner says.

Connecting with community
To connect with the community, MASS Design Group is working with Shemariah J. Arki, an educator, activist and organizer in Cleveland. Arki is accompanying the firm's team as they meet with Central residents and business owners. She is helping engage community members in dialogue and assuring them that their voices will be heard, and that the intent of the process is to address their needs.

The MASS Design team began its work in June. In July, Arki and the team did the first of several planned "immersion weeks" with walking tours and casual meetups with people on the streets and at community events.

Arki says that unlike with some other community projects, there's no starting blueprint to influence what the MASS Design team will come up with. "Often in the community we get plans that are coming from municipalities, organizations, building plans, demographic plans, streetscapes, and the plans are already written, and community members are then invited to the table for focus groups, or feedback, or responses," she says.

Kroner's team also is meeting with representatives of major institutions across Cleveland to seek input and ideas for working together.

The health campus project coincides with other development efforts across the community and region, such as plans to expand Cleveland State University, that offer potential opportunities for collaboration. "Those connection points are really, really terrific to try to work together as a synergistic effort, as a once-in-a-generation moment," Kroner says.

MASS Design's community engagement work will continue until the end of the year. The firm will present its vision for the health campus to the Sisters of Charity Foundation early in 2022. The proposal will include recommendations for structures, services, costs and potential sources of funding.

In for the long haul
Susanna H. Krey says that while the specifics of that vision are as yet unknown, she expects it to focus on addressing social needs such as education and workforce development that affect health outcomes in Central. Krey is president of the Sisters of Charity Foundation and senior vice president of the Sisters of Charity Health System.

"We all know these are needs of the neighborhood and of the greater Cleveland community, and the services are important to support the neighborhood revitalization goals of the campus," says Krey.

Gordon sees the campus as the continuation of the congregation's service in the Central neighborhood.

"While we've never had the opportunity to undertake something of this nature like a health campus, the Sisters of Charity of St. Augustine have a 170-year legacy of addressing health, education and human services in our area," Gordon says.

In addition to the medical center, the congregation sponsors four other ministries in the Central neighborhood. Carrying forward the legacy of Sister Ignatia Gavin, CSA, a pioneer in the treatment of alcoholism, two have areas of focus on providing behavioral health services.

Towards a healthier community
The foundation began laying the groundwork for the health campus in 2020, when it engaged a firm to do what Krey calls a "national landscape analysis" of how health care is evolving and create four case studies of similar campuses. The analysis and case studies provided lessons learned about how to address unmet needs in communities that will inform the foundation's efforts.

"It's a very innovative and cutting-edge approach that is nascent but really gaining traction around the country as more health systems and organizations recognize the importance of the social determinants of health as a complementary strategy to improve health outcomes," Krey says.

Although the early research was being done as COVID-19 was sweeping the nation, Krey says the pandemic hasn't slowed the initiative. Rather, she says, the disparities and inequities the pandemic brought to the fore have only further emphasized the importance of giving communities access to services beyond acute care that address needs that impact health.

Gordon says the foundation is confident the keys to transforming Central will come from the community itself.