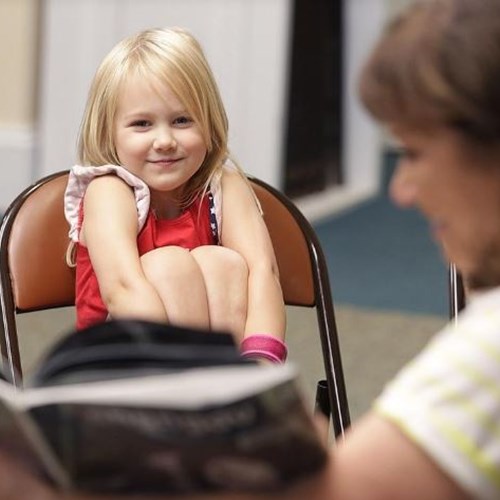 Studies show children who read with a parent or caregiver before entering kindergarten have increased vocabulary and comprehend learning materials more quickly. SPARK, which stands for Supporting Partnerships to Assure Ready Kids, is a parent-focused intervention program that gets kids ready for kindergarten. The Canton Repository recently spotlighted the program in an article about reading to children before kindergarten to spur vocabulary and comprehension. SPARK is managed and operated by the Early Childhood Resource Center.

Her mother, Crystal Smith, began reading to Madison as a baby. The mother-daughter duo read up to 10 books a day. Time spent reading has led Madison to develop a love for books and learning.

According to a study conducted at Ohio State University in April 2019, children whose parents read one book a day from birth enter kindergarten having heard 1.4 million more words than a child not read to daily. This creates the “million word gap,” which is one explanation of the differences in vocabulary and reading development in young children.

In just over three weeks, Madison will have her first day of kindergarten at Fairless Elementary School. Many schools across Stark County and Ohio kick off the new academic year over the next month.

“I’ve always read to her since she was an infant,” Smith said. “She loves books, and we read a lot. I believe that reading to your children when they’re young really helps them to improve their vocabulary and to learn to read a lot sooner.”

Stephanie Beltz, a kindergarten teacher with the Tuslaw Local School District, has been an educator for 25 years. During those years, the expectations of what youngsters should know before entering kindergarten have increased.

When she first started her career as a teacher, children focused on learning the letters and sounds of the alphabet and recognizing colors and numbers.

Now, she said, kindergarten is focused on learning sight words, also known has high frequency words, that children should recognize without needing to sound the word out. “Who” and “the” are both examples of sight words.

Students also learn three-letter words that begin and end with a consonant such as cat, dog and hat, Beltz said.

“It’s changed a lot in my teaching time,” she said. “I feel like kindergarten has become what first grade back in the day used to be.”

Attending preschool or working with a parent will help a child succeed and excel in school, Beltz said. When children attend school, they should know how to write their name, identify some letters of the alphabet, cut in a straight line and have independent skills such as zipping their own coat.

“The more letters they know the better,” Beltz said. “The more books they hear, the better they’re going to be able to read and comprehend stories. They’ll pick up skills a lot faster in kindergarten.”

Students who haven’t read as much before school may have more difficulty or learn at a slower pace compared to kids who enter kindergarten recognizing some words and letters, Beltz said.

Lesson plans make room for this gap between rates of learning by having students do different activities associated with the same lesson. For example, Beltz said, if she reads a story to the class, she might have all the students draw a picture of the main character. More advanced students might also be challenged to write a sentence below their drawing.

When creating a lesson plan, Beltz tries to meet students where they’re at. She doesn’t want any student in her classroom to feel overwhelmed by the material or, on the other hand, bored.

“It takes a lot of time to prepare, but we’re trying to get a year’s growth out of every kid,” Beltz said. “We want them to be challenged, but not overwhelmed. We want to give them what they need at their rate of learning.

Getting ready for the first day

Smith said her daughter has an extended vocabulary because of their frequent story times. Madison also was involved in the Supporting Partnerships to Assure Ready Kids (SPARK Program)

It’s not unusual, Smith said, for someone to think her daughter is older than 6 years because of her ability to hold a conversation.

“The more you read to your children, the more they’re going to be interested in reading,” Smiths aid. “Even if they can’t read the words, they pick up on them.”

Danielle Bunner, SPARK communications coordinator, said enforcing a routine can help younger students prepare to start school or go back to school. Having a time for reading or completing summer workbooks can simulate homework, and students should have a regular bedtime.

New students entering kindergarten should be introduced to the school and teachers before the first day through an open house visit. This will help them feel more comfortable, Bunner said.

Before the start of a new school year, Beltz said, Tuslaw’s kindergarten teachers get together at Camp CHOF in Tuscarawas Township for a social where new students and their parents can meet the teachers for ice cream and games.

The social, which will be Aug. 15 this year, helps “develop the Tuslaw family mentality,” Beltz said.

Reading back-to-school books — such as “The Kissing Hand” by Audrey Penn or “The Night Before Kindergarten” by Natasha Wing — can help children get used to the idea of going to school, she said.

“It’s hard to realize your baby is entering the school age,” Beltz said. “It’s a really nice way to meet the parents. It’s also nice for the kids to make connections in their brain as to who the teachers are.”