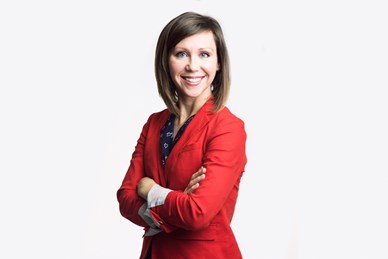 As vice president of communications, Rebecca guides strategy and oversees implementation of communications initiatives of the health system, consistently articulating and supporting its healing mission of service to individuals, families and communities. She also leads teams, creates systems and executes campaigns that create awareness and momentum of subsidiaries, especially the Sisters of Charity Foundation of Cleveland and the behavioral health service line at St. Vincent Charity Medical Center. This summer, she celebrates ten years of service advancing the mission of the health system’s founding sisters, who served as the first public health nurses in Cleveland. In 1851, they began an enduring legacy of responsive ministry, creative stewardship and an ongoing quest for social justice that lives on today. Rebecca takes a special interest in topics including homelessness, infant mortality, substance use disorder and poverty.

Rebecca is active in the community, serving on committees of: the Catholic Health Association of the United States (communications committee), The City Club of Cleveland (health care committee), National Institutes of Health and Substance Abuse and Mental Health Services Administration HEALing Communities Study (communications work group), Fund for Our Economic Future (communications committee, growth & opportunity), Northeast Ohio Hospital Opioid Consortium and The Communications Network. She is a 2016 graduate and class representative of the Bridge Builders program of the Cleveland Leadership Center.

Prior to joining the Sisters of Charity Health System, she practiced at an accomplished PR agency. Throughout her time at Landau PR, her local clients included the Fund for Our Economic Future, Cleveland Plus, Facing History and Ourselves, Case Western Reserve University and the Greater Cleveland Food Bank. National clients included Taste of the NFL, Freightliner and Western Star. Her first job out of college was PR coordinator at the Precision Metalforming Association.

She is a graduate of the E.W. Scripps School of Journalism at Ohio University.

On a personal note, Rebecca married her French Canadian husband, Julien, in 2008. Together, they live in Avon with Evie (8) and Hudson (5). She is a lifelong Girl Scout and co-leader of Evie’s Brownie troop.